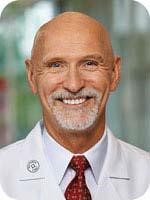 Ed Benzel, MD, FAANS, was born in 1948 in Spokane, Washington. He obtained a Bachelor's degree from Washington State University in chemical engineering in 1971. He enrolled in the Medical College of Wisconsin School of Medicine (MCW) that same year and in 1975 began a surgery internship at MCW, which was followed by his neurosurgery training under the tutelage of Dr. Sanford Larson. He then completed a spine fellowship at MCW.

In the fall of 1981, Dr. Benzel moved his family to Shreveport, La., to assume his academic position at Louisiana State University (LSU). There he became chief of the division of neurosurgery. After eight years of substantial clinical activity, as well as clinical and laboratory research activity at LSU, he and his family moved to Albuquerque, where he took the position of chief of the division of neurosurgery at the University of New Mexico (UNM) School of Medicine. During his tenure at UNM, he initiated a highly successful spine fellowship (1991). A neurosurgery training program at UNM followed, which was accredited in 1993 – all under his direction. The first resident began in October of that year and the neurosurgery program began training a full complement of residents in July 1994. Dr. Benzel, after his years at the helm of the Division of Neurosurgery at UNM, relocated to Cleveland in 1999. There, he assumed the position of director of spinal disorders at Cleveland Clinic, heading a multidisciplinary spine care and research team. Soon thereafter, he became the neurosurgery program director. In September 2007, in addition to his duties as director of the center for spine health and director of the neurosurgery residency program, he was appointed chairman of the department of neurosurgery at Cleveland Clinic. Finally, he has moved on to become emeritus chairman and director of career development for the Cleveland Clinic Neurological Institute, assisting the Institute and neurosurgery chairs in their ongoing quest for excellence in all domains (clinical, education and research). In these capacities, he has assumed an overarching mentorship and guidance role, while maintaining a busy clinical practice that focuses on complex cervical spine pathologies and spine and spinal cord tumors.

Dr. Benzel's major clinical and research interests have embraced many aspects of neurosurgery, but have focused on spinal disorders. Over the years, his clinical research has encompassed a wide spectrum of non-spine neurosurgical pathologies as well, including adult and pediatric hydrocephalus, the Chiari malformation and syringomyelia, the management of neonatal hemorrhage, cerebrovascular disease, critical care and concussion.

He has published 310 peer-reviewed manuscripts, 420 book chapters, over 600 abstracts and commentaries and he has edited 28 books. Dr. Benzel single-authored the 1st, 2nd and 3rd editions of the textbook entitled "Biomechanics of Spine Stabilization," – treatises that revolutionized the surgical management of spinal disorders. In addition, the 1st, 2nd, 3rd and 4th editions of "Benzel’s Spine Surgery: Techniques, Complications, Avoidance and Management" are highlights of his publication endeavors. His work as a contributor to literature is not done. He continues to publish, and in 2015 he became editor-in-chief of World Neurosurgery.

Dr. Benzel is actively involved in the AANS, the CNS, the AANS/CNS Spine Section, the Cervical Spine Research Society and the Lumbar Spine Research Society. He has played a seminal role in both the development and delivery of hands-on spine surgery courses since the early 90s. He is the director of the Cleveland Spine Review, which for 20 years, has provided a week-long didactic and hands-on cadaver dissection experience. This course, which began at UNM in Albuquerque, moved to Cleveland in 2000 and has provided a comprehensive spine surgery experience for a multitude of residents, neurosurgeons and orthopedic surgeons over the past two decades. He is on the Editorial Review Board of the Journal of Neurosurgery, Neurosurgery, Spine, and The Spine Journal. He also serves as an ad hoc reviewer on a variety of other journals. He has been actively involved in spearheading the development and nurturing of the Decade of the Spine (2001-2010). Dr. Benzel was the first chairman of the World Spine Society, which in 2009 was re-organized and restructured as the World Spinal Column Society. From its inception to date, he remains the patriarch of this society.

Dr. Benzel's outside interests include running, motorcycling, yard work and Cleveland sports teams. He finds time to be involved in a variety of other outdoor activities with his family. He and his wife, Mary, have four children; Morgan, Jason, Brian and Matthew and six grandchildren; Karsen, Lucas, Parker, Jacob, Samantha and Madison.