Ira Rick Abbott, MD, FAANS(L), began his neurosurgical career at Baylor College of Medicine where he was a medical student and then a neurosurgery resident from 1980-1986. He then undertook his pediatric fellowship at the New York University Hospital, and joined the faculty at the Children’s Hospital at Montefiore as the Director of Surgical Neuro-Oncology. 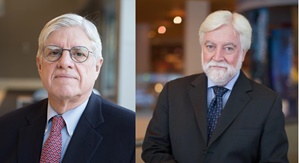 James Tait Goodrich, MD, PhD, FAANS, spent his early years painting houses and focused on his passion of surfing in California. He then enlisted and served as a Marine during the Vietnam war, during which time he decided his next step would be to pursue a medical career.

He received his undergraduate degree from the University of California, Irvine in 1974, then went on to receive his Masters in 1978 and PhD in 1980 from Columbia University where he returned to earn his MD degree as well. He did his medical internship and residency in neurosurgery at the New York–Presbyterian Hospital and New York Neurological Institute.

After graduating from neurosurgical training, Dr. Goodrich joined the staff at the Albert Einstein College of Medicine and spent more than 30 years there as Director of the Division of Pediatric Neurosurgery. He unfortunately passed on March 30, 2020.

A rewarding part of Dr. Goodrich’s and Dr. Abbott’s careers was their educational experiences in pediatric neurosurgery outside of the United States. These experiences included attending conferences and visiting institutions to either observe a colleague’s work or advise on surgical techniques. These experiences both lead to lasting friendships and a rich repertoire of knowledge on how to best manage their own patients’ illnesses and conditions.