Fund Purpose: To support the annual Harbaugh - Drake Neurovascular Outcomes Research Scholar who will present at the CV section at the AANS Annual Scientific Meeting

Robert E. Harbaugh, MD, FAANS, obtained his MD from the Pennsylvania State University College of Medicine and his general surgery and neurosurgery training at Dartmouth. During his career at Dartmouth, Dr. Harbaugh served as Director of the Cerebrovascular Disease Center, Director of the Neurosurgical Laboratory and as Residency Program Director. In 2003, Dr. Harbaugh accepted the position of Professor and Chair of the Department of Neurosurgery, Neurosurgery Residency Program Director and Professor of Engineering Science and Mechanics at the Pennsylvania State University. He has been promoted to the rank of University Distinguished Professor and appointed as the Director of the Penn State Neuroscience Institute. In 2013, he was named a Penn State Alumni Fellow, the highest award of the Penn State Alumni Association. He also holds a clinical appointment as Guiding Professor of Neurosurgery at Huanhu Hospital in Tianjin, China. 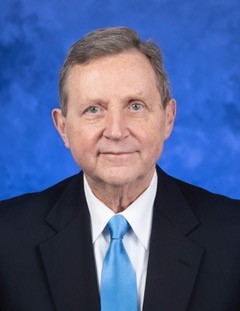 Dr. Harbaugh has been an invited speaker throughout the world. He has been a visiting professor at 67 academic institutions and the honored guest of neurosurgical societies in Bulgaria, Canada, China, the Czech Republic, Germany, Greece, India, Japan, South Korea, Spain and Taiwan. He has delivered 25 named lectures. Dr. Harbaugh’s research interests include clinical trial design, outcomes analysis, quality improvement in neurosurgery and neural engineering. He has edited five books and published more than 400 articles, book chapters and abstracts on various neurosurgical topics. He has served on five editorial boards and obtained continuous research funding from the NIH, NATO, USDA, the Commonwealth of Pennsylvania, industry, foundations and other organizations since 1985.

Dr. Harbaugh has also served on the Board of Trustees of the Penn State Hershey Medical Center, Lebanon Valley College and the Saint Joan of Arc School. He has five children and is married to Kimberly S. Harbaugh, MD, a neurosurgeon specializing in peripheral nerve surgery.

Charles G. Drake, MD, was born in Windsor, Ontario, Canada, July 21, 1920. He received his MD degree from the University of Western Ontario at London in 1944, and became a Fellow-of-The Royal College of Surgeons, Canada, in 1952.

His neurosurgical interests were centered on cerebral aneurysms and arteriovenous malformations, as well as acoustic neuromas. His bibliography contained more than 120 scientific articles and chapters.

Dr. Drake was a member of 24 national and international medical societies, and held honorary membership in 10 foreign neurosurgical associations. In 1979, he served as the Sims Commonwealth Travelling Professor for The Royal College of Surgeons of England in Australia, Malaysia, and India. He held Honorary Fellowship in The College of Surgeons of South Africa and The Royal Colleges of Surgeons of Ireland, Edinburgh, and Australia. He received honorary degrees from Memorial University (D.Sc., 1973) and University of Toronto (LLD., 1982). In 1982, he received the Order of Canada, and in 1983, the Royal Bank Award. He was awarded the Harvey Cushing Medal by the AANS, and The Distinguished Service Award by The Society of Neurological Surgeons. He retired from surgery in 1992.

He was an excellent pilot, and enjoyed golf, fishing and upland hunting.